Middleton Innovative Education (aka MIE pronounced like pie) is looking to revolutionize the way we teach and engage students in science, technology, engineering and math or STEM.  Our programs transform the eSports concept of gaming into a true STEM learning model.
Learn More

In-School, Afterschool, or at the MIE Dream Center

Teachers can facilitate the MIE-Racing programs in a STEM Lab, Math class, Science class, Engineering class or After-School Club. We use the unique and exciting world of racing to teach principles of engineering through our innovative online platform and then apply those principles through race simulation, game-based play and eSports competition, while at the same time connecting students to real world industries and inspiring them to reach their true potential.

Teachers can facilitate the MIE-Racing programs in a STEM Lab, Math class, Science class, Engineering class or After-School Club. We use the unique and exciting world of racing to teach principles of engineering through our innovative online platform and then apply those principles through race simulation, game-based play and eSports competition, while at the same time connecting students to real world industries and inspiring them to reach their true potential.

We’re not your average eSports.  Although we love connecting people to the game and sharing our love of all things automotive, our true passion is creating educational opportunities and unique learning experiences that propel students of all ages towards career and life success.  We believe learning is a lifelong process and we help make that process a little more exciting!
Discover MoreSee us in action

Enjoy dedicated focus on Automotive topics, from Fuel to Engines and much more!

Racing Leagues that connect users to the sport and provide a structured approach for those with a need for (virtual) SPEED.

Connect and chat with others who share the same passion and interests for learning and success.

Job listings and resources for both career seekers and explorers plus real-time advice from experts in the industry.

Students compete in a fast-paced team environment where they must quickly adapt to solve problems, make decisions and find the best strategies to win the race.

Students see how STEM is applied in real world jobs for both professional and technical career paths and have access to college and career resources at their fingertips 24/7. 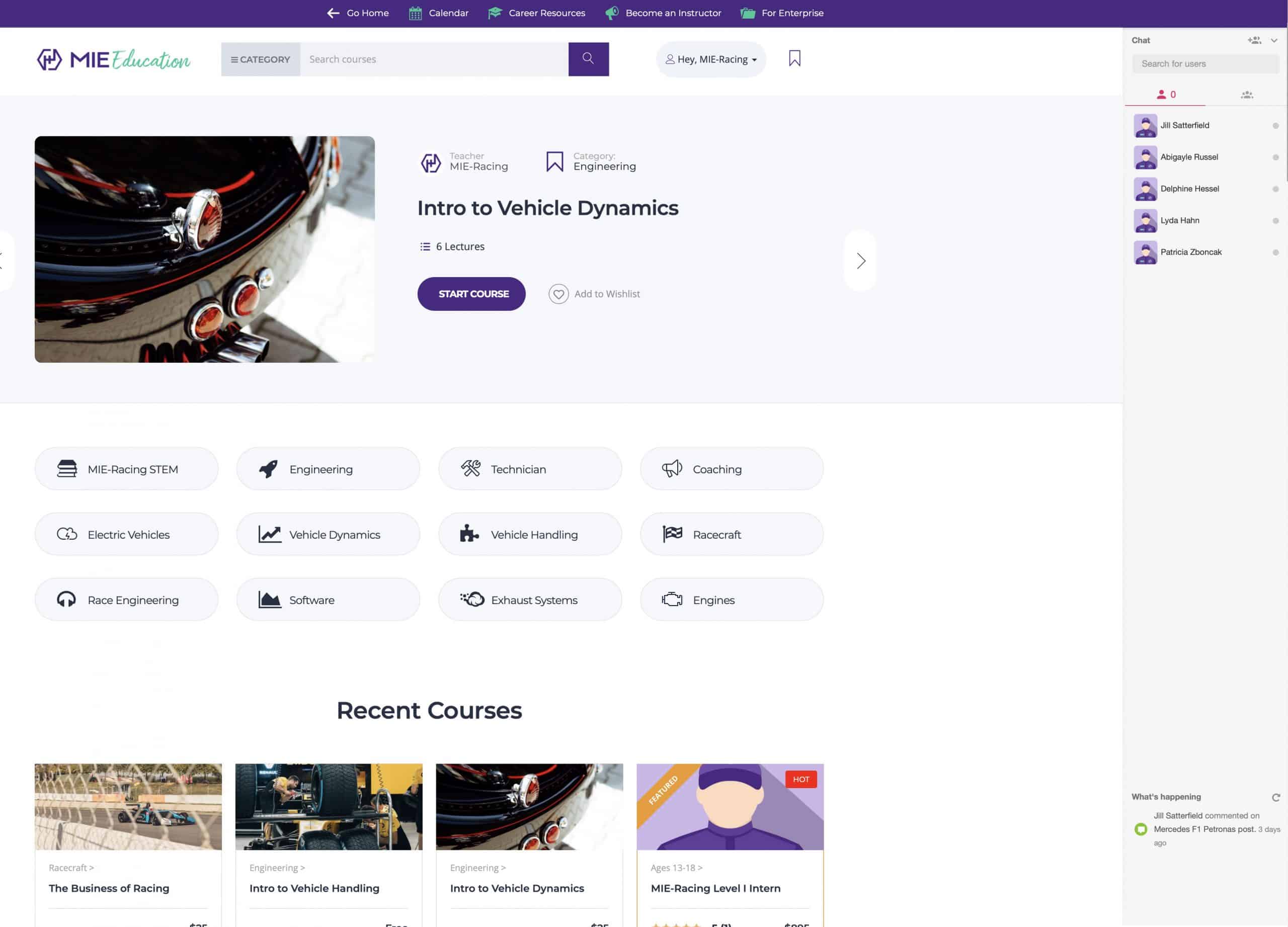 Apply to Become an Online Instructor

Create an online video course and earn money by teaching people around the world.

Apply to Become an Online Instructor

Create an online video course and earn money by teaching people around the world.

Earn money every time a student purchases your course. Get paid monthly through PayPal.

Help people learn new skills, advance their careers, and explore their hobbies by sharing your knowledge.

Take advantage of our active community of instructors to help you through your course creation process.

Meet the Founders Behind Our Success

Accomplished automotive engineer, race engineer, and extreme auto enthusiast who travels to tracks and auto events across Europe, US and the world. Majored in Physics at MIT and Electrical Engineering at Clemson. Comes from a family of educators.

David L. Middleton has always had a passion for the Automotive industry and especially Motorsports. At nine years old, he saw a Porsche commercial where an engineer talked about how he used all aspects of beauty in life to help him design cars. That commercial awakened something inside of him, even at an early age, which he never forgot. And it was from that young age that he set the ultimate goal to one day work in the German Automotive industry.

But getting there wasn’t easy. In fact, it was a fight. As he got older, it became harder and harder to realize the goal, as there was no defined path of how to get there, especially as an African-American who wanted to one day work in another country. After attending MIT and majoring in Physics, he moved to Germany and tried to secure a job in the Automotive industry. He didn’t know the language or the people, but he had a dream. After receiving rejection after rejection, and eventually working as an English teacher to support himself, he soon realized that if he wanted to live out his dream of one day working for a German Automotive company and eventually a Motorsports team, he’d need to leave everything behind and return to a top automotive engineering school. So with little money but big dreams, he returned to the US and enrolled at Clemson University, a well-respected engineering school known for its ICAR program (International Center for Automotive Research). In order to support himself during those years, he worked multiple jobs, all while trying to find time for the complex engineering course work and at the same time improve his German language skills. In the beginning, he didn’t have the money for a car so he’d walk miles in the summer heat just to get groceries. There were many days when he wanted to quit. There were many days where he wondered if all the hard work was worth it. His dream and vision seemed so far away, but he learned to persevere and kept going even when it hurt.

Today, David not only speaks fluent German, but has many years of engineering experience under his belt at a well-known global automotive company, where he worked in projects including base engine calibration and ECU development for major OEM’s around the world. Not only has he achieved his dream of working in the German Automotive industry, but he was also able to feed his love and passion for motorsports, where he was a Trackside Race Engineer for a racing team at the famed Nürburgring. He has worked as an engineer for multiple 24HR Nürburgring races, attended 24HR LeMans, 24HR Spa, Formula 1 Spa and many other motorsports events around Europe and the world. He could regularly be found at the Nürburgring and Spa in his track day car, where he has participated in many driver trainings and courses over the years. Until May 2017, he lived and worked in Stuttgart, with his house a short 10 minute drive to the main Porsche factory and museum, all coming full circle from that young boy of nine years old who was inspired to have a dream.

David currently resides in the greater Los Angeles area and he is now on a mission to give back and inspire others to have their own dream. With Middleton Innovative Education and the MIE-Racing program, he plans to encourage diversity and promote passion for STEM careers, while inspiring the next generation to expand their horizons and realize their true potential.

Sought-out expert in finance and controlling who has extensive experience in team leadership and IT project management and who for the past ten years has traveled the world effecting positive change for a multi-billion dollar automotive company. Majored in Accounting at the University of Georgia.

Jill Satterfield was raised in a small southern town to working class parents, but from a very young age she had dreams of one day traveling the world and making a difference. Although her parents had no college education and very little money, they still encouraged her from an early age to follow her dreams. She fought hard to get accepted to the University of Georgia and became the first person in her family to ever attend college. She worked 30+ hours a week at a local accounting office to help pay for her college expenses. It was an exhausting four years, both physically and emotionally, but through hard work and determination she eventually graduated with a degree in Business Administration and Accounting from the University of Georgia.

After working several years as a Corporate Accountant for Georgia-Pacific and then an Accounting Manager for the Medical College of Georgia, she decided to pursue her dream of one day traveling the world and living in Europe. So at the age of 27, she landed a job as an Accounting Supervisor with the Department of Defense working for the European division of Stars & Stripes. Her hard work and tenacity led her to quickly rise in the organization and she was eventually promoted to Director of Finance, responsible for the overall financial management throughout Europe and the Middle East. This position was then used as the springboard to her next challenge, where for the past 12 years she has worked for a multi-billion automotive supplier, holding numerous high-level positions both in the US and at the German Headquarters. Most recently she has served as an in-house consultant and IT project manager for the company, where she specialized in the rollout and implementation of IT projects around the world. She has led multi-million dollar projects in Germany, France, Spain, the Netherlands, Mexico, South Korea, China, Russia and Japan – realizing her childhood dream of traveling around the world.

Jill met MIE Founder David L. Middleton in 2006 while living in Germany and they were married years later in a private ceremony. The couple currently reside in the greater Los Angeles area with their two young daughters. In her role as Chief Operations Officer for MIE, she leverages her vast experience in both international business and automotive to guide the strategic vision into a scaleable and sustainable solution for maximum impact. She is also responsible for the company’s financial reporting and oversees all technical development. Her mission is to fulfill her childhood dream of making the world a better place, and she believes that with Middleton Innovative Education and the MIE-Racing Programs, she can help inspire the next generation to unleash their potential and enable a sustainable future for all.

We are working hard to open our first state-of-the art MIE Racing Dream Center in the greater Atlanta area, featuring 10 networked simulators for eSports competition and classrooms dedicated to our MIE-Racing STEM programs. 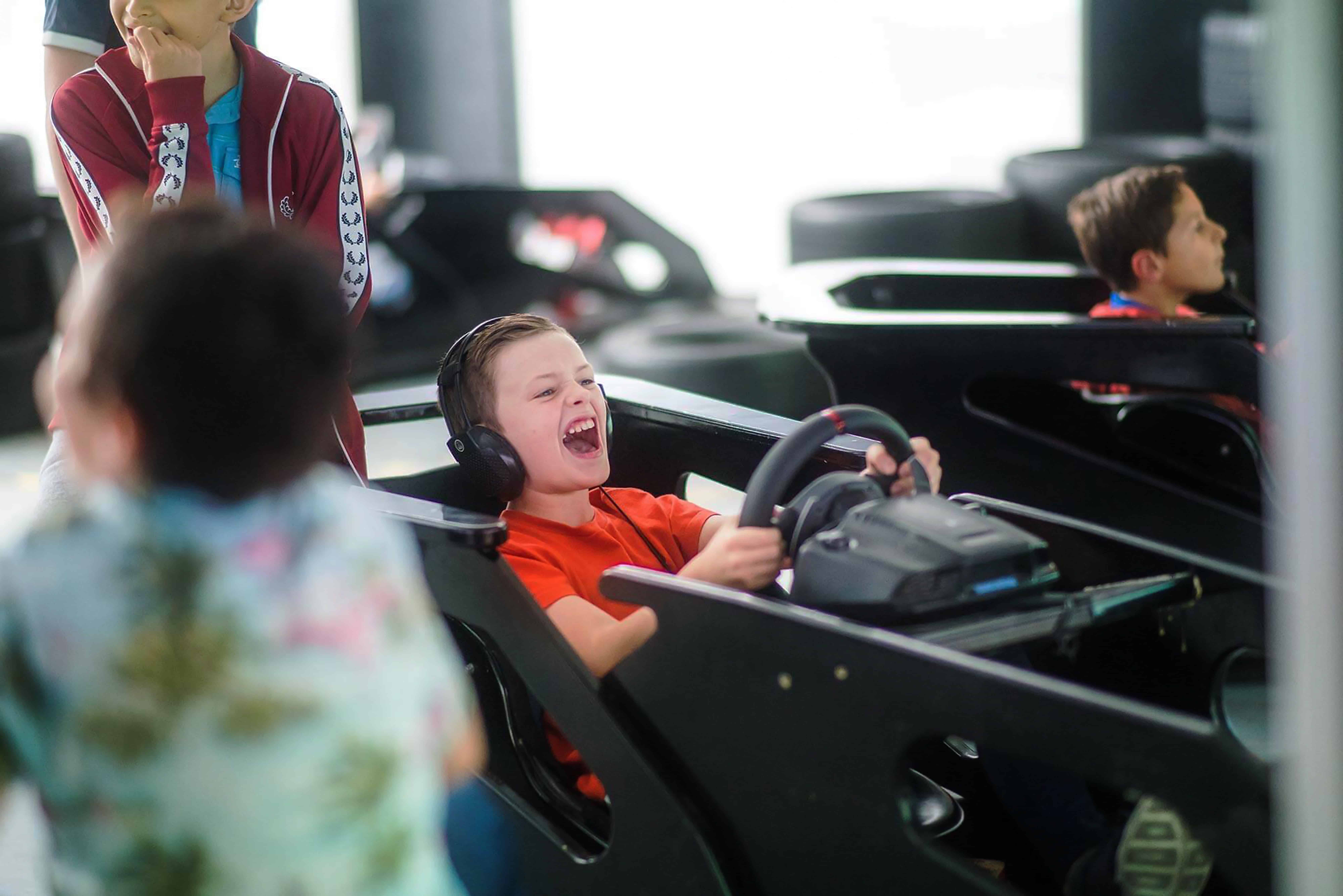 We don't like to brag, but we're changing the game

“MIE-Racing was awesome! David showed me career paths that I didn't even know were out there. And it was so much fun!”

“I really appreciate the hands-on attention and expert knowledge, not only in subject matter but as a role model for my child.”

“Love it. Just can't say enough how good this program is. So much fun and I learned a lot too.”

Bring one of our MIE-Racing programs to your school or organization today!